Celebrating projects to study and protect wildlife in the Bay Area 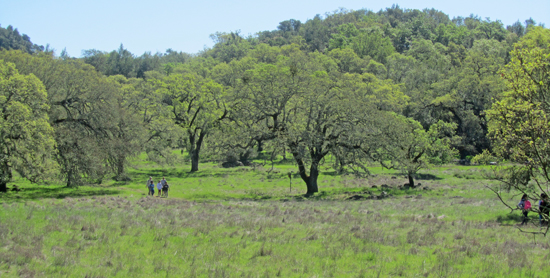 In a post to celebrate Earth Day today, Jamie Rappaport Clark, President and CEO of Defenders of Wildlife, points out that the United States has many “firsts in conservation:”

To follow her lead, I am dedicating this post to honor projects that are studying and protecting wildlife and biodiversity in the Bay Area. All over California natural areas that border urban areas are shrinking and becoming increasingly disconnected, and the San Francisco Bay Area is no exception. In addition to threats from losses of habitat, wildlife struggle with dangerous road crossings, exposure to rodent poisons (see my last post about the “Griffith Park mountain lion”) and other human conflicts at the urban-wild interface. To protect the region’s biodiversity of native wildlife, several groups are working on these issues around the Bay including the following:

Bay Area Puma Project – As a project of the Felidae Conservation Fund, the Bay Area Puma Project involves research and public education programs in and around the San Francisco Bay Area. The project’s main goal is to increase knowledge and awareness about Bay Area puma populations to promote better co-existence between humans and pumas in the region and to foster a more harmonious relationship between humans and the natural world.  I volunteer for this project by maintaining and monitoring “camera traps,” which offer a window into a world we rarely see including the movements of pumas, bobcats, deer, coyotes, foxes, skunks, raccoons and other wildlife common to healthy Bay Area ecosystems. 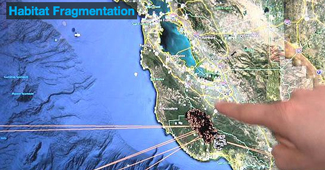 Santa Cruz Puma Project – The Santa Cruz Puma Project started as a collaboration with the Bay Area Puma Project and today is a research partnership between UC Santa Cruz and the California Department of Fish and Wildlife. Researchers are collecting data on mountain lions to better understand their physiology, behavior and ecology and to study the impacts of habitat fragmentation (roads, housing developments etc.) on mountain lion behavior, reproduction and movement. The data will inform local conservation priorities and the placement of wildlife crossing structures across major freeways.

Sonoma Valley Wildlife Corridor Study – The Sonoma Land Trust is in the middle of a multi-year project to study wildlife movement in an area between Sonoma and Napa Counties. The Sonoma Valley Wildlife Corridor is a “pinchpoint” that is five miles long and only three-quarters of a mile wide at its narrowest point. Using a grid of camera traps, the group is evaluating properties within the corridor for barriers to wildlife movement and working with landowners to ensure wildlife can move through the region. With a $1.8 million grant from the Gordon and Betty Moore Foundation the land trust can purchase properties and easements that are critical to keeping the corridor open to wildlife. In March, I had the good fortune to spend two days in the valley’s rolling oak woodlands while checking cameras with the project manager, Tony Nelson, and the assistant project manager, Kara Caselas. 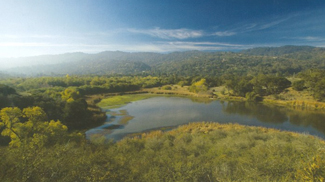 Jasper Ridge Biological Preserve – Wireless digital camera traps are providing unprecedented and detailed information on some of the Jasper Ridge Biological Preserve’s big unknowns, such as the abundance and behavior of large predators and the nature of biological corridors linking this preserve to other natural areas. On this 1,200-acre nature preserve and biological field station owned by Stanford University, the project team uses camera traps to silently record wildlife movements — from mountain lions to jack rabbits — to help address many challenges that characterize the wildland/suburban interface including the role of large predators in ecosystem health. Project leader Trevor Hebert posts a “Wildlife Photo of the Day” on the website, which he also promotes through his Twitter account. 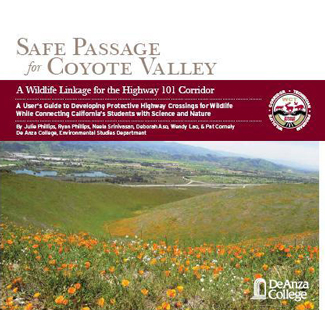 De Anza College Wildlife Corridor Project – This community college’s environmental studies program has connected students with science and nature while conducting an impressive study in Santa Clara County’s Coyote Valley, which provides one of the largest remaining contiguous tracts of undeveloped valley floor between the Santa Cruz Mountains and the Diablo Range to the east. Their research demonstrated that Highway 101 through Coyote Valley is permeable to wildlife movement, via two overpasses, three underpasses and twenty-seven culverts.

Wildcare – This nonprofit wildlife rehabilitation center in San Rafael in Marin County has been working for years with the state and Environmental Protection Agency to ban unsafe rodenticides – like the rat poison that is currently harming the Griffith Park mountain lion. WildCare tests predatory animal patients — animals that eat rats and mice — for exposure to rat poisons. Of the 138 samples they sent to the California Animal Health and Food Safety Laboratory (CAHFS) at UC Davis in 2013, an astonishing 76.8% of tested patients showed some exposure to rat poisons. Visit www.wildcarebayarea.org/rodenticide for more information on WildCare’s 2013 testing data.