A celebrity lives in a park above the Hollywood Hills amid a thick cover of chaparral and oak woodlands. He has helped rally the public to understand the plight of wildlife living on the urban fringe. He goes by the name “P-22” as the 22nd mountain lion to wear a GPS radio-collar in a study by the National Park Service.

Widely known as the “Griffith Park mountain lion,” P-22’s improbable existence on an island of nature in the high hills above Los Angeles gained widespread media attention, the interest of a renowned wildlife photographer and a feature in National Geographic magazine in December 2013. Griffith Park is separated from other natural areas by major freeways and dense urban development on all sides.

Until recently, over the last two years this four-year-old puma has managed to thrive in Griffith Park. This past week, news spread that this iconic wild cat is suffering from rodent poison exposure and mange, a skin disease (NPS infographic explains). 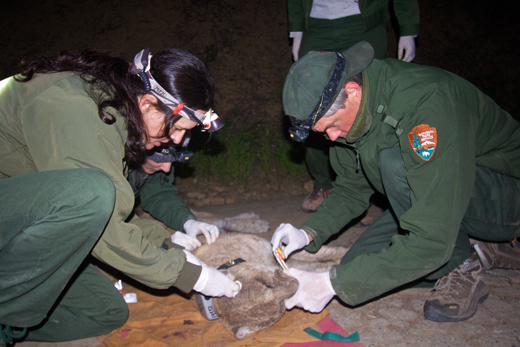 As a volunteer for a puma research project in the Bay Area, I have followed the story of P-22, a puma born in the Santa Monica Mountains in Southern California, with keen interest.

At the age when pumas (also known as cougars and mountain lions) leave their mothers to find their own territories, P-22 crossed two major Los Angeles freeways and on February 12, 2012 was caught by a “camera trap” funded by Friends of Griffith Park. Another puma in the NPS study, P-18, also tried to disperse and find new territory free of other males, but he died trying to cross one of the same freeways crossed by P-22.

Another puma in the NPS study, P-18, tried to disperse and find new territory free of other males, but he died trying to cross one of the same freeways crossed by P-22.

Since 2002 the National Park Service has studied the habits of mountain lions in and around Santa Monica Mountains National Recreation Area — the world’s largest urban national park — to understand how human development and urbanization affect mountain lions, which require large territories to survive and reproduce. Over 30 of the study’s pumas have worn GPS radio collars including the Griffith Park mountain lion, who was first outfitted with one in spring 2012 after he was discovered by the camera trap in the park.

Pumas roaming in the Santa Monica Mountains and through other wild lands surrounded by urban areas, face many challenges. Adult males like P-22 typically require 100 to 200 square miles of habitat. What is astounding is that P-22 has been making the most out of less than seven square miles and without any conflict with humans.

Most of the time mountain lions are elusive. They stay out of sight and most commonly hunt at night. We rarely hear about them until they venture into urban neighborhoods or when something has gone wrong. 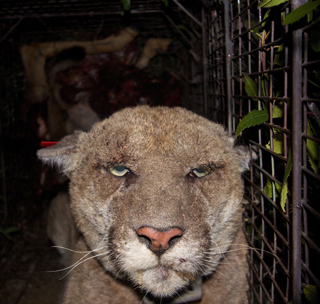 The story of the Griffith Park mountain lion has given the public a close-up view of the plight of a puma living near millions of city dwellers.

Before the recent unfortunate news, in late March I contacted Kate Kuykendall, Public Affairs Officer for the Santa Monica Mountains National Recreation Area. I asked her a few questions after P-22 was caught on video surveillance cameras as he roamed a Hollywood neighborhood that borders Griffith Park in the pre-dawn hours.

1. P-22 was recently caught on camera in an urban neighborhood. Some news reports suggested he was trying to make his way back to his birthplace in the Santa Monica Mountains. Can you comment on this?

We have no reason to believe P-22 was trying to make his way back to the Santa Monica Mountains. It would certainly seem that, at some point, he will attempt to leave Griffith Park in search of a mate, but we’re not sure when or how that will happen.

2. What data do you track with P-22 and other pumas in your study?

The biggest data set is basic location data. Although GPS collars can sometimes fail or be spotty, for the most part they reliably deliver several locations per day. Another example of data we track is kill sites. During the 12+-year study, our biologists have hiked in on more than 400 kill sites (of those, 95% were mule deer).

3. Do the researchers know when the health of the population might show signs of distress due to inbreeding?

At this point, these signs are not present. In other examples, such as with the Florida panthers, there were signs such as testes that were not descending, malformed heart valves, etc.

4. Because P-22 is wearing a radio collar, have you seen a changing pattern in his movements over time or more recently?

I’m not familiar with the most recent data, but during the course of the two years that we’ve been tracking P-22, he continues to spend the majority of his time in the most natural areas of the park.

5. At the age of 4 would it make sense that he is now seeking a mate?

I don’t think anyone can predict exactly what his plans are. I think the fact that he’s stayed in such a small piece of habitat for so long is surprising in and of itself, but we don’t really have anything to compare it to.

6. Male pumas typically require 100-200 square miles of habitat, while Griffith Park only provides less than 7 square miles. Is P-22 living in a much smaller territory than is typical for a male mountain lion?

Yes, very much so!

8. Does P-22 extend his range beyond Griffith Park by crossing major roads and highways?

Not at this point.

9. My understanding is that a puma like P-22 would require about one deer per week. Does Griffith Park have a sizable population of mule deer and smaller prey animals to support P-22’s diet?

Your understanding is correct. No one knows for sure about GP’s mule deer population, but P-22 continues to eat his natural prey of mule deer and has not seem to have had trouble finding enough to eat.

We are not aware of any impacts from the drought to pumas in the Santa Monica Mountains. Same is true for bobcats and coyotes, but I can’t speak for the other wildlife.

In this blog I highlight ideas, news and resources to spark creative thinking, action and progress for social and environmental causes. Based in Berkeley, California, I am a writer, consultant and Women’s Environmental Network board member. To receive blog post updates, please subscribe to my newsletter.
Recent Posts
JOIN MY NEWSLETTER For updates from the field, please subscribe. Privacy Policy
Copyright Christine Sculati. Berkeley, California, USA. All Rights Reserved © 2020
Sunset Magazine sparks conversation about the future of waterEnvironment
Celebrating projects to study and protect wildlife in the Bay AreaConservation, Environment
WordPress Appliance - Powered by TurnKey Linux