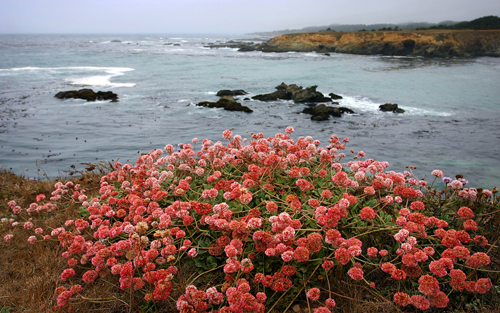 On the California coast 160 miles north of San Francisco, a rare natural phenomenon rises from the sea. Despite its ecological significance, Jug Handle State Natural Reserve landed on the California State Parks closure list in May 2011.

Without the park advocates, who are putting up a fight, we might not realize what is at stake here.

From Sea Stacks to a Pygmy Forest

Visitors to this park will find rocky sea stack formations, a sea arch and a hiking trail that climbs through the Jug Handle Creek watershed on terraces spanning 500,000 years in geological history – an Ecological Staircase. The website Closing California Parks shares stunning images of the reserve in a photo essay.

Sea arch and people on trail at Jughandle beach – Photo by Art Quadraccia. Courtesy of the Mendocino-Tahoe Conservancy.

Few places on earth display a more dramatic transition of ecological succession, from a coastal prairie to towering redwoods to a pygmy forest, where you’ll find 100-year-old trees that are less than five-feet tall. The soils here are 1,000 times more acidic than soil found in the redwood forest.

The ancient marine terraces have attracted the interest of ecologists, botanists, geographers and naturalists, including the late Hans Jenny, a University of California, Berkeley professor and soil scientist, who was instrumental in preserving the famous pygmy forest as part of the Jug Handle State Reserve. His description and interpretation of the pygmy forest can be found here.

Olmsted Park Fund aspires to raise $1 from every California resident

Alden Olmsted, a board member of the Mendocino-Tahoe Conservancy and founder of the Cotati-based Olmsted Park Fund has taken the lead to save Jug Handle. According to Stephen Hein, director of the Mendocino-Tahoe Conservancy, Olmsted issued a check – backed by contributions of hundreds of Californians – to the state as part of an agreement to keep the park open. Through the fund, Olmsted aspires to collect $1 from every California resident and park visitor to save parks.

Alden Olmsted is defending some of the parks that his father, the late naturalist John D. Olmsted, helped to save. His father, who founded the Mendocino-Tahoe Conservancy, helped with efforts to preserve land in Northern California starting with Jug Handle State Natural Reserve in the 1960s. Without activism by Olmsted and others, this land might have been the site of a motel and restaurant.

John D. Olmsted (1938 – 2011) was a distant cousin of the family of famous landscape architects, according to a March 2011 obituary published in the Sacramento Bee. Frederick Law Olmsted (1822-1903) was recognized as the founder of American landscape architecture and the nation’s foremost parkmaker. In the 1920s, the newly formed California State Parks Commission hired Olmsted’s son, Frederick Law Olmsted, Jr. (1870 – 1957), to survey and identify the state’s “iconic landscapes” for protection as parks.

If people don’t stand up, the parks will close

Borrowing the words of fellow blogger Glenn Brank (NorCalYak.com), the “park score” is now 59 to 11. Unfortunately, at 59, California state parks on track for closure remain far ahead of rescued parks. (By the way, if you are a paddling enthusiast, be sure to check out the humorous and thoughtful NorCal Yak blog. Glenn is keeping track of parks on the closure list that also happen to be prime kayaking spots.)

The state has already started to lock the gates on some state parks slated for closure due to budget cutbacks – possibly closing them permanently (Castle Crags and Providence Mountains). California State Parks officials have said that they do not think many on the closure list will make it. Yet, recent news suggests that the department is willing to consider lowering the bar for “donor agreements” by reducing park hours and services – if park advocates are willing to step forward.

Blog series
This is the 23rd article in a series on threats to California State Parks and the search for sustainable funding.