How one Bay Area nonprofit connects culture and land 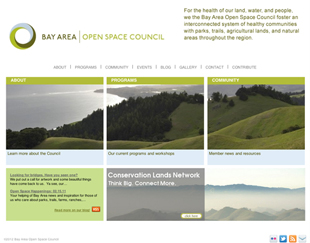 If you are someone who cares about parks and open spaces you should head over to the Bay Area Open Space Council’s blog, where you can stay connected by subscribing to the RSS feed or email list.

Over the years, the Council’s online presence has grown to complement the real life (yes, in person!) gatherings of members of the conservation community.

Earlier this month, not long after the Council’s most recent gathering titled, “Who cares? And Why Should They? A conversation about land and people,” Annie Burke and her colleagues rounded up links on related topics to keep the conversation going online.

The Council’s blog brought my attention to a new video produced by the National Parks Conservation Association (NPCA) featuring Yosemite National Park Ranger Shelton Johnson, who reminds us: “You shouldn’t have to convince people to go to paradise.”

For several years, Johnson has been on a mission to reach people who have never dreamed of visiting Yosemite National Park, where only 1% of visitors are African American. You might recall Johnson’s appearances in Ken Burns’ six-part documentary series on our national parks, America’s Best Idea.

If your organization is using or experimenting with video, blogs and other social media to connect with people and build movements, then you might want to join the next gathering of the Bay Area Open Space Council:

When: March 15, 10am-1pm
Where: David Brower Center, Berkeley
Speakers will include: