The power of local: nonprofits and volunteers hope to rescue state parks 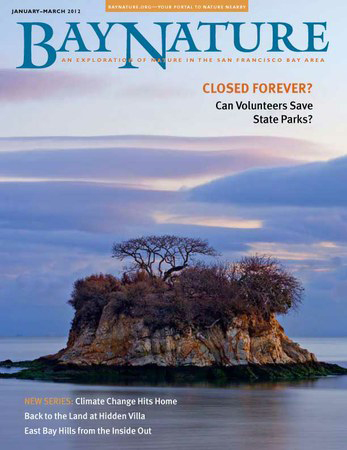 Since September 2011, I have focused this blog on the unprecedented threats to California’s state parks and efforts by community volunteers, nonprofits, philanthropists and lawmakers to save parks now facing indefinite closure (Park funding crisis series).

While covering this topic, I have connected with park volunteers, bloggers, advocacy organizations, hikers, climbers and others who are concerned. Some fear losing access to one of their favorite parks and others see our state parks legacy falling apart.

My friends over at the nonprofit Bay Nature Institute are also closely following the issue. Hitting newsstands and mailboxes any day, the January – March 2012 issue of Bay Nature features the parks crisis as the cover story. Longtime Sierra magazine editor and local reporter Joan Hamilton illuminates the real people behind the hard work of trying to save some of the parks here in the Bay Area – from Henry Coe State Park to Jack London State Historical Park.

As we head into 2012, I would like to thank the individuals who have helped me follow the parks crisis in 2011 with information, links and camaraderie. Many thanks to:

As this story continues to unfold, I will see you in 2012.

Blog series
This is the 17th article in a series on threats to California State Parks and the search for sustainable funding.