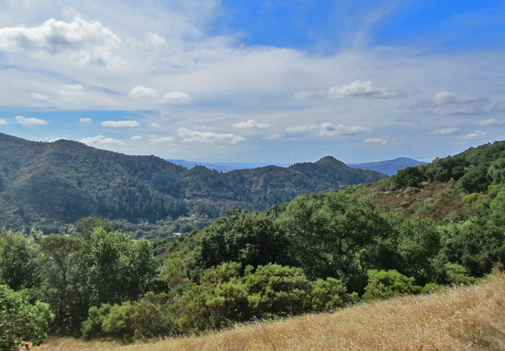 In “We’re Rich! (In Nature.)” New York Times columnist Nicholas Kristof wrote, “Our national lands are a rare space of utter democracy: the poorest citizen gets resplendent views that even a billionaire is not allowed to buy.”

Yet, here in California, caretakers for 70 of these valuable public assets are withdrawing services as we move toward a $22 million funding cut for the state park system by July 2012.

The California State Parks Foundation is leading the “Save Our State Parks Campaign” to urge the public to speak out, visit state parks, volunteer and spread the word. This past weekend, I found one of the campaign’s flyers (right) at Sugarloaf Ridge State Park, a 4,020-acre park in the Mayacamas Mountains east of Santa Rosa. Here, I discovered the lush source of Sonoma Creek (still springing water in October) as I hiked through madrone, fir and oak forests to a sweeping 360-degree view on top of Bald Mountain. This park is one of the 70 on the closure list.

Origins of the state park system

Preserving endangered redwoods was one of the first motives for establishing the first few state parks in California. In 1927 a coalition of citizens, led by the nonprofit Save-the-Redwoods League, campaigned for a state park bill. With unanimous approval by the legislature, Governor C.C. Young signed the bill into law in the same year. Then in 1928, while working for the newly established California State Park Commission, Frederick Law Olmsted, Jr., surveyed lands across the state, ultimately recommending a list 79 parcels that the state should acquire for state parks. Many of those “iconic signature landscapes” identified by Olmsted were spared from the budget axe, said Ruth Coleman, Director of the California State Parks in an interview with Capitol Public Radio last week.

The new park system first raised $6 million with a successful park bond act in 1928. Later in the 1964, the public again approved a $150 million bond act to allow the state to acquire new state park lands threatened with development. Then, in 1974 the people of California approved a $250 million state park bond. By 1980, the wealth of the California state park system included 200 miles of coastline, 14,000 campsites and 1,500 miles of riding and hiking trails and historical sites including Jack London’s home in Sonoma County.

In a departure from the park systems earlier support, voters turned down a statewide ballot initiative in November 2010 that would have provided ongoing dedicated funding for state parks through a vehicle license surcharge. Now with budget cuts to the state parks department, “The system of parks is bigger now than the Department of Parks and Recreation,” said Coleman on the Capitol Public radio while adding:

It is a sad statement that we can no longer afford to run these parks.”

How will the parks close?

On the Capitol Public Radio show, “The Future of California’s Parks,” Coleman told listeners that since this is the first time in the history of the state park system that they are being forced to cut off funds and close parks, this is a “really grand experiment.” She was advised by parks directors in other states to not send a message to the public that the parks would be fenced and padlocked. This approach would only attract “illicit activities.” Rather, using an approach called “adaptive management” the gates would stay open and the public would keep an eye on park activities to make sure that the parks are not overrun by illegal activities. “We hope the public will be willing to respect public safety, the environment of parks and clean up after themselves,” said Coleman.

You will be welcome to hike but you will find no rangers, locked bathrooms and no trash services.

How can parks be saved?

The budget mandates that the state parks department save $22 million. It is a done deal. Unless we rethink and reinvent park financing, the parks will close. The only way around this is if philanthropic groups, nonprofits, concessionaires and other entities come in and run the parks at least at a partial level. For example, Ruth Coleman is “cautiously optimistic” that they will be able to keep Henry Coe State Park open with backing from local philanthropists. With this approach, the concern here is that parks in poor and remote areas may not get such a lifeline. Coleman agreed:

It is a real struggle, not having entities to infuse energy and money into those parks.”

The search for creative ways to finance parks

The state park operations and funding model of yesteryear clearly is not working today. Around the state, park advocates are looking for creative solutions to keep the beloved parks in their communities open. On the state level, Ruth Coleman’s department is analyzing visitor services that will create and generate revenue, knowing that some might call this commercialization of the parks. “We are going to need a different mindset … a new paradigm.”

We are going to have to figure out other ways to fund these parks and some of them will be unconventional.”

Blog series
This is the sixth article in a series on threats to California State Parks and the search for sustainable funding as park systems are forced to reinvent.